Hatha 1 Yoga in Coggeshall Village Hall. Tuesday 6.45pm
A mixed level practice, with reference to safe alignment and pranayama.
Haṭha yoga is a branch of yoga. The Sanskrit translation of Haṭha, literally, means "force" which alludes to a system of physical techniques called asanas.

In India, Haṭha yoga is associated through its traditional founder Matsyendranath. There are two forms of Haṭha yoga, one consists of the eight limbs of yoga, which are pathways to purifying the body and mind, in order to find peace and joy,and the other consists of eight mudras (gestures). Patanjali Joli, who wrote the Yoga Sutras, used the ancient eight-limbs system, as a means of bringing awareness to the mind, whereas Hatha Yoga, today, is a culmination of mind, body and breath.
​
Single class entry - £10
3 class pass - £25 (to be used within 1 month)
5 class pass - £40 (to be used within 2 months)
6 months unlimited class pass - £500

Limited spaces, booking is essential.
​
"When using classes it is required that 24 hours notice is given when cancelling, otherwise the class will be forfeited.
In certain situations Aly will offer certain dispensation.
Ongoing class concessions are to be paid on the last class of a prepaid bundle.
Thank you for your cooperation and ongoing support,"  Aly 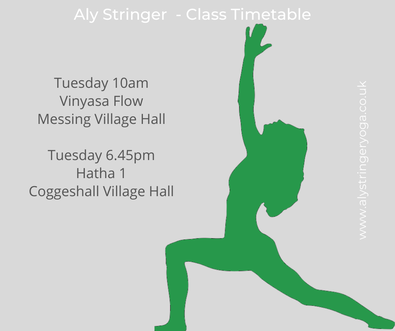